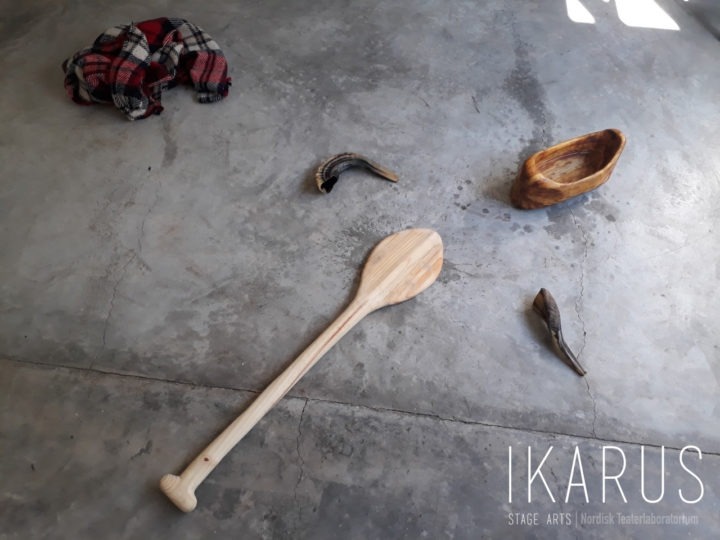 Another way of feeling less lonely during my individual process was recording my own feedback after rehearsing. I started this habit the 12th September 2017 and now I have around 30 of them. They were generally some opinions about the work I had been doing in the room. It was like if someone would have been witnessing the process from the outside, sort of like a director’s voice rather than a performer’s comment.

This internal division among different roles has been very important for me and has allowed me to focus on different aspects of the show. There was a dramaturg (who barely stayed with me, only appearing in 2017 and then again in 2019, first as a dramaturg and then as a dramaturgist), an actor, a director, a lighting designer (who came in a few weeks before the premier), a costume designer, another guy who worked on the space (I think he might have something to do with the lighting designer), a make up artist (quite unexperienced), someone obsessed with the sound and everything related, someone assinting the training sessions, who was constantly finding ways to strengthen the show… in short many Benjamines, little Bejamines with a different expertise. It has always been difficult to explain this way of perception and I always finishes it by saying: roles are roles.

“I think I am going to start this habit of recording myself after rehersing, practicing, whathever…  to get a little bit of feedback. My actor-self talking to my director-self, right? Basically so I can hear my thoughts outloud. Let’s see what happens. It is sort of the same as taking notes but, who knows, it might be useful!”

Any cookies that may not be particularly necessary for the website to function and is used specifically to collect user personal data via analytics, ads, other embedded contents are termed as non-necessary cookies. It is mandatory to procure user consent prior to running these cookies on your website.